Search
Follow simple up on WordPress.com
Join 1,038 other subscribers

Posted by Kathy Peterman on March 15, 2015 in Money, Simplify

In February I took a challenge which lined up with my goal to spend less.

“CONSUMABLES – For one month, only allow “consumables” to enter your house.  For example: purchasing food, shampoo, toothpaste, would be OK (anything that can be used up), whereas new clothes, dishes, trinkets would *not* be OK (anything that will end up staying in the house). As with any quest, the goal is to “explore” what happens when you try it, and to share your experiences as they unfold.”

One of my first questions I had was how does the challenge address entertainment or eating out, as those are things I really enjoy and it would be extra hard to give up.  The leader drew the line at physical things coming into the house.  She also encouraged us to think ahead before the month began to buy anything we really needed, but I didn’t really have items I needed to go get.

Just a few days into the month:  My garbage disposal broke.  The challenge group directed me to a page where you can view steps to fix items.  I tried the steps provided for a garbage disposal without luck, but it did turn on briefly which helped it no longer back up and I cleaned it out by hand.  I then put a kitchen drain stopper that acts to catch items from going down the drain.  I will likely replace my disposal, but what I would say is this bought me some time and I learned I can get by without a one.  I know many people from other countries have never seen or heard of a garbage disposal. 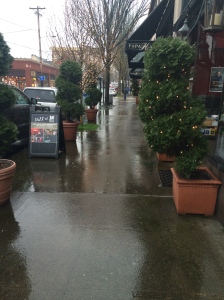 On the 5th:  I was out for an appointment on 23rd Avenue in Portland.  This is a street about a mile long and it is filled with shops, from local businesses, to Williams Sonoma.  I purposefully avoided going into the new age bookstore, so I would not be tempted with making a purchase, and instead I just enjoyed walking in the rain.  But, later in the month, I went in the bookstore with a friend and had no problem.  After more than two years of doing gentle waves of de-cluttering, my desire to keep my life simple and not have to mess with lots of stuff is very strong.

On the 11th:  Not sure if this is a success or fail…so perhaps it is a bit of both. I went to IKEA to donate extra nuts and pieces from items I’ve bought there over the past 10 years. Donated = success. Got info for blog about recycling they do at IKEA = success. Spent zero in the store = success. Got free bag for my trash project by using a coupon I had = success, but oops, even though free, it’s not a consumable.

Mid month:  I had friends coming over to my house to do vision boards.  I thought I would have to buy a board, but upon looking in a closet, I had one already.  How nice to use what I already had and I noticed how the impulse is to just go get something, versus look at what we have that might work or even be exactly what we are looking for!  Another member of our group did that with a kitchen sponge that she wanted.  Her old sponge got broken glass in it, so she went to buy a new one, but couldn’t find the one she liked.  When she got home she looked deeper in her cupboards only to find she had a new sponge just like the one she wanted.  So sometimes solutions are right at our fingertips, we just need to look. 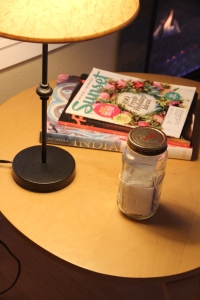 On the 20th:  I bought a carbon monoxide detector as I need it to pass an inspection for my Airbnb room. It would have been a $97 fee and having them have to return to do another inspection if I didn’t buy it, so it seemed a good reason to step outside of our quest.  While I was nearby, I decided to go into Target to get a small notepad for $1.94. What I would say about that is it was a very interesting experience. I saw all kinds of things that I about a year or two ago would love to wander around and put in the cart as they drew me in…thank you cards, items for the kitchen, the $1 items…but today I was clear what I wanted and why. I use the notepad for my gratitude and miracle jar and while something else would work, I like having the papers all the same size to dump out at the end of the year and read through. So on one hand I thought it was a fail as I bought a non-consumable, but on the other hand it was a success as my present day self observing my past habits and not buying into them. After de-cluttering a few rounds, I am just so clear I don’t want more to de-clutter in the future…so I am being more mindful of purchases. I’ve found this February challenge has been helpful in this regard.  I was reminded by a group member, that paper actually is a consumable.  Doh!

I think this challenge really encouraged me to be mindful of what is consumable and not.  I also noticed that many “desires” are emotional ideas I quickly attach to, versus true needs. I think it’s interesting how culturally we’ve been encouraged to consider all things we want as needs and how quickly we expect to fill that perceived gap. That being said, it would be hard for me to do this for several consecutive months.  I am grateful to have participated in this experiment and look forward to new quests in the future.

If you enjoyed this blog, why not “follow” me via my front page, so you will get an email when new blogs go up.  I do not share your email with anyone.

Have any of you done a buy nothing or buy only certain things type experiment either voluntarily or due to circumstances?  What did you learn from it?